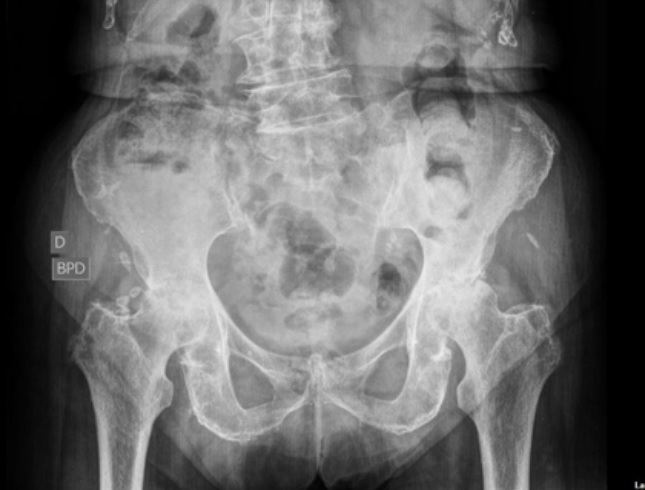 Bilateral Rapidly Destructive Osteoarthritis of the Hip: Could We be Misdiagnosing? A Case Report

Learning Point for the Article:

Suspicion of infection should be considered in any diagnosis involving joint destruction.

Introduction: Rapidly destructive osteoarthritis (RDO) of the hip is characterized by rapid joint destruction with no specific underlying diagnosis. Diagnostic protocols and algorithms to rule out other possible causes of the rapid destruction of the hip have not been described. Furthermore, microbiological diagnostic procedures in the medical field have dramatically changed since RDO was first described. 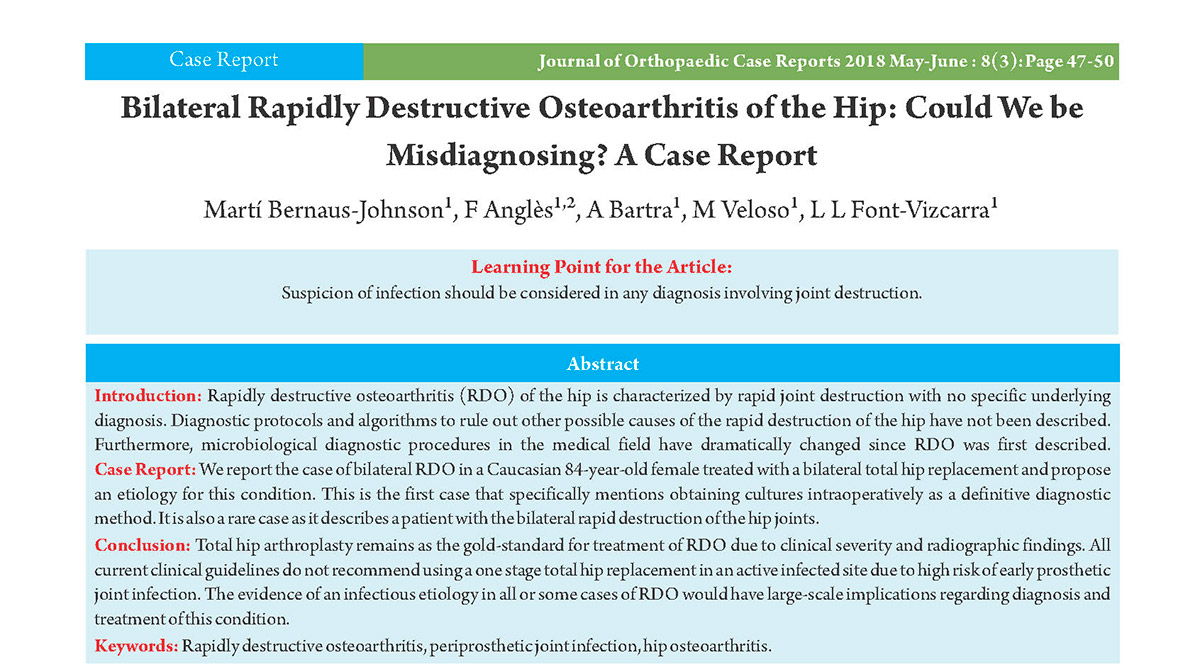 Case Report: We report the case of bilateral RDO in a Caucasian 84-year-old female treated with a bilateral total hip replacement and propose an etiology for this condition. This is the first case that specifically mentions obtaining cultures intraoperatively as a definitive diagnostic method. It is also a rare case as it describes a patient with the bilateral rapid destruction of the hip joints.

Conclusion: Total hip arthroplasty remains as the gold-standard for treatment of RDO due to clinical severity and radiographic findings. All current clinical guidelines do not recommend using a one stage total hip replacement in an active infected site due to high risk of early prosthetic joint infection. The evidence of an infectious etiology in all or some cases of RDO would have large-scale implications regarding diagnosis and treatment of this condition.

Rapidly destructive osteoarthritis (RDO) of the hip is characterized by rapid joint destruction with no specific underlying diagnosis. There are different names for this clinical condition including rapidly destructive hip disease, rapidly destructive coxarthritis or Postel's disease [1] . RDO was first described in 1957 by Forestier, and it was in 1970 when Lequesne [2] defined rapid chondrolysis as a radiographic space narrowing >2 mm in 1 year, or 50% joint space narrowing in 1 year and no evidence of other forms of rapidly destructive arthropathy. These radiographic findings are accompanied by pain limiting function and progressive shortening of the leg due to femoral head destruction. It is unknown if there is any relation of the previous osteoarthritis in the pathogenesis of the disease. Other possible causes for a rapid destruction of the hip joint include rheumatoid arthritis, aseptic necrosis of the femoral head, metabolic arthropathies, and septic arthritis. When this disease was initially described, microbiological diagnostic techniques had nothing to do with actual methods, as well as what we knew about low virulence pathogens and slow growing bacteria. We report the case of an 84-year-old female diagnosed of bilateral RDO scheduled for total hip arthroplasty (THA) of both hips.

A 84-year-old female was scheduled for bilateral total hip replacement due to osteoarthritis of both hips (Fig. 1). Medical history included chronic Hepatitis C virus infection with no other medical conditions reported. The patient was allowed to decide which hip would be performed first. 5 months after scheduling, the patient was admitted for surgery arriving in a wheelchair, and new pelvis radiographs were taken (Fig. 2). Other causes of the rapid destruction of the hip joint were ruled out, and the patient was diagnosed of bilateral RDO. Keeping in mind a possible septic etiology, despite there was no history of septicemia and inflammatory markers were elevated due to chronic hepatitis, we decided to take samples for microbiology and histology during the procedures. The right hip was performed through an anterior approach by a senior surgeon following standard antibiotic prophylaxis with 2 g of cefazolin 20 min before skin incision. An uncemented prosthesis was implanted with no complications. Femoral head destruction led to an important defect in the posterior and superior wall of the acetabulum. This conditioned high and medial implantation of the cup to achieve stability. 4 days after the first procedure was performed, one out of six cultures was positive for Enterococcus faecium with no local and systemic signs of infection or pain. Synovial biopsy revealed fibrosis, chronic inflammation, calcifications, macrophages, and osteoclast giant cells with no signs of acute inf lammat ion. Your ine cultures were negat ive. The Musculoskeletal Infection Society criteria [3] were not met and the patient did not receive antibiotic treatment. 6 days later, after a favorable post-operative evolution, the left hip was performed through a posterior approach by a different senior surgeon with the same hip system but with a cemented stem (Fig. 3). In the left hip, the acetabulum was also affected by the bone destruction, but the cup was able to be placed at a correct height. This ended up with a leg length discrepancy that is well tolerated by the patient taking into account her previous functional status. 5 days after the second procedure andfollowing a post-operative period without complications, the patient was discharged before obtaining definitive microbiological results. Cement was loaded with gentamycin, and the same antibiotic prophylaxis protocol was used. For the second surgery, three out of four samples were positive for the same microorganism. 2 weeks later, the patient was readmitted due to wound drainage of the right hip. Surgical debridement and irrigation with the exchange of the modular components were performed. Empiric antibiotic treatment was started with teicoplanin, amikacin, and rifampicin according to the Infectious Diseases Department's protocol at our institution. Amikacin was stopped 3 days after surgery because no Gram-negative Bacilli were isolated. All four samples obtained during the debridement were positive for E. faecium 5 days after surgery with identical sensitivity tests as for the first hip. Pathogen-specific antibiotic treatment was then started with amoxicillin and rifampicin. 2 weeks after debridement and 1 month after the first surgery, the patient was again readmitted due to wound drainage of the same right hip. Again, surgical debridement and exchange of modular components were performed continuing with the same antibiotic treatment. For the second debridement, one out of five samples was positive for Propionibacterium acnes. Amoxicilin treatment was followed during 3 months. At 18 months after surgery, the patient had recovered to previous full activity. Blood tests at 18 months showed normal C-reactive protein levels and an erythrocyte sedimentation rate of 40 mm/h. In the last X-ray control, there were no signs of loosening (Fig. 4). Patient regained complete gait independence without pain. No further complications were reported.

RDO is a rare condition in which much is unknown. In the majority of cases, it is considered a unilateral condition that mainly affects elderly women. Of all indications for THA, it is only accounted for 1–5% of cases. Multiple etiologies have been suggested for RDO including idiopathic chondrolysis, intraarticular deposition of hydroxyapatite crystals, abnormal immunoreaction, or subchondral insufficiency fractures [4] . In 2014, Fukui et al. [5] suggested that the inversion of the labrum is necessary for subchondral insufficiency fracture and demonstrated these findings at an early stage of the disease as a mechanism that contributes to RDO. Macroscopic, microscopic, and histological analyses have been described by Seitz et al. [6] on femoral heads of patients diagnosed of RDO allowing differential diagnosis from osteonecrosis or severe osteoarthritis. Macroscopically, these femoral heads are characterized by an almost complete loss and moderate sclerosis on the osseous surface with concomitant massive synovitis. Microscopically, superficial fractures of the bone trabecular, debris, fibrotic changes, and hyperemia along with the multifocal formation of resorptive giant cell granulomas rimmed by enlarged osteoclasts. The synovial membrane invariably showed increased number of macrophages and enlarged osteoclast giant cells associated to debris with no signs of rheumatic disease or infection. These findings were also observed in the histological analysis of our case. Bilateral disease has been described in up to 10% of cases [7] . Some authors consider bilateral disease does not exist and cases diagnosed as bilateral are secondary to unrecognized systemic diseases. Clinical and radiological criteria for RDO include (1) severe hip pain with a history of <1 year,="" (2)="" severe="" destruction="" of="" the="" femoral="" head="" or="" narrowing="" of="" the="" joint="" space="" at="" a="">2 mm/year rate, and (3) no other identifiable reason for a severe hip joint destruction, including infection.</1> Most case reports do not specify how other identifiable reasons for hip destruction, including infection, are ruled out to properly diagnose RDO. As far as is concerned, there is no specific differential diagnosis algorithm for this purpose. In case series published up to date [5, 6, 8] , there is no specific mention of microbiological culturing during the surgical procedure. During the past years, several authors have suggested the possibility that repetitive or chronic native joint infections caused by low virulence microorganisms may have a role in the physiopathology of certain cases, especially those initially classified as primary hip osteoarthritis [9] . Joint infection caused by low pathogenic potential microorganisms has been proposed to have a role in the physiopathology of osteoarthritis [10] . These patients typically show no clinical features of infection (fever, local symptoms) and have normal inflammatory markers. However, no cultures are obtained in primary surgeries even in RDO cases. Since intraoperative cultures are generally not taken as a routine process, the number of early prosthetic joint infections (PJIs) caused by the presence of microorganisms in the hip joint before surgery is currently unknown. Our case allows for multiple considerations regarding RDO and its possible misdiagnosis. In the first hip, a one-stage cementless stem was implanted in a joint with a low-grade infection. Therefore, no local antibiotic was present. Although both THA procedures showed positive cultures for the same E. faecium, the second hip never suffered any complications. Many hypotheses can be made regarding this fact. A cemented stem loaded with gentamycin was used in the second hip which could have possibly prevented any infectious complication. The presence of positive cultures for E. faecium allowed a diagnosis of acute PJI and demonstrates the importance of ruling out infection before total hip replacement and evaluates cultures for slowgrowing microorganisms. Bilateral septic arthritis of the hip is an exceptional finding, but some cases have been described in patients with predisposing conditions such as chronic inflammatory destructive rheumatoid or juvenile arthritis [11] . As far as we are concerned, our case is the first reported case of low-grade subacute bilateral septic arthritis.

THA remains as the gold-standard for treatment of RDO due to clinical severity and radiographic findings. It is advised for these cases to be prioritized with regard to surgical interventions due to intraoperative technical difficulties in advanced cases. All current clinical guidelines do not recommend using a one stage total hip replacement in an active infected site due to high risk of early PJI. For this reason, it is highly advisable to rule out infection as a cause of pain in cases that suggest a deviation from typical osteoarthritis clinical history.

We suggest that some low-grade native joint infections are initially misdiagnosed as RDO or primary hip osteoarthritis and that an exhaustive routine protocol to rule out native infection should be performed in these cases. This should include obtaining samples for microbiology when treating a RDO. The evidence of an infectious etiology to all or some cases of RDO would have large-scale implications regarding diagnosis and treatment of this condition.

This website uses cookies to improve your experience while you navigate through the website. Out of these, the cookies that are categorized as necessary are stored on your browser as they are essential for the working of basic functionalities of the website. We also use third-party cookies that help us analyze and understand how you use this website. These cookies will be stored in your browser only with your consent. You also have the option to opt-out of these cookies. But opting out of some of these cookies may affect your browsing experience.
SAVE & ACCEPT
Open chat
1
Trauma Advance
Good morning, how can we help you?